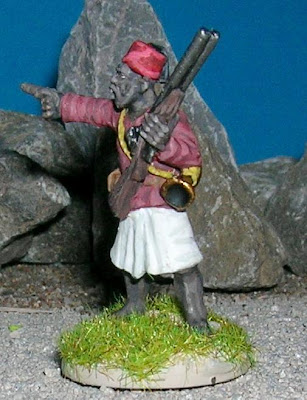 " The source of the Nile is that way!"

Here is my Foundry Sidi Bombay figure, which I finished just before Christmas.
Sidi (or Seedy) Mubarak was born in about 1820 and was a member of the Yao tribe (who now live in Mozambique, Malawi and Tanzania). At the age of 12 he was captured by Arab slavers and sold to a wealthy Arab merchant in Zanzibar. When the merchant moved to Bombay, Sidi went with him. He was freed in his early thirties when his master died, adopted the surname “Bombay” and returned to Africa. He joined the Sultan of Zanzibar’s army and was posted to Chokwe garrison. It was here that Burton and Speke, setting out on their expedition in 1857, hired Sidi and five other soldiers to protect the group.

Burton had originally appointed a half caste Arab, Said Bin Salim, as head bearer of the expedition but fired him when he discovered he was stealing form the expedition. He replaced him with Sidi Bombay. Burton later said he “worked on principal and worked like a horse..an active servant and an honest man” and we was “the gem of the group” (of bearers). 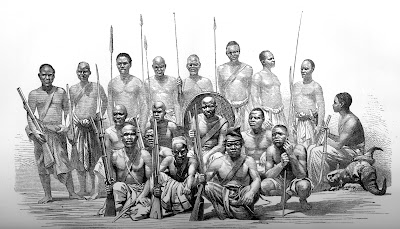 
He was a powerful man with sharpened incisors but he spoke Swahili and also Hindustani so he was the only person, other than Burton, that Speke could converse with. He acted as Speke’s gun bearer, lugging two heavy guns with him at all times. Bombay proved to be a tough and resilient figure who became a key member of the expedition although he could be temperamental and his appetite for food became legendary. Speke, in particular, came to rely on him and hired him for his subsequent expedition with Grant where they continued the search for sources of the Nile from 1860 until 1863. Later, he was also hired in 1871 by Stanley during his search for Livingstone and by Cameron in 1873 for his transcontinental trip. He, therefore, had a major role in four of the most important European explorations of Africa. He was given a pension by the Royal Geographical Society in 1878 and died in about 1885. 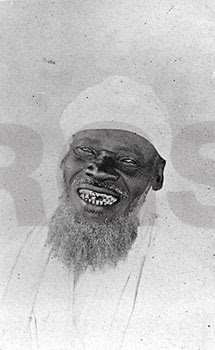 Sidi and his famous teeth!
Posted by legatus hedlius at 11:14 1 comment: