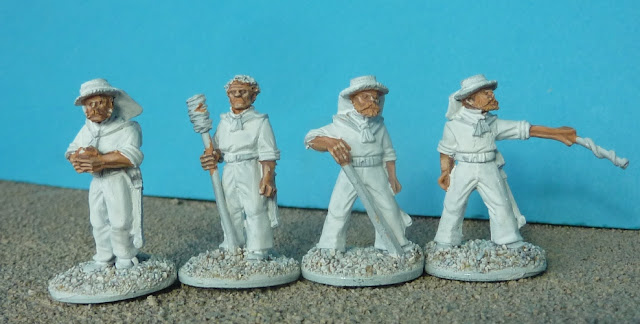 I only need to paint a Naval Brigade gun and crew to finish my British force but have been held up due to problems in how to do this.  What I need is a Royal Navy gun crew and gun for the paddle boat.  The only suitable Foundry figures came from their old Zulu Wars range and were rather small compared with the Copplestone Darkest Africa ones. Then I saw the new Mutineer Miniatures Naval Gun crew and they seemed just the right size.  Although they come from 1856 not the 1890's there doesn't seem to be much difference in the uniform other than the shirt collar; the later uniform had a collarless shirt.  I did think about trying to carve this off then decided that no-one will notice by the time they are on deck and around the gun.  Anyway maybe they find a shirt with a collar wards off bugs better!

I was then wondering about a gun for them.  An old style naval smoothbore cannon on small wheels wouldn't be right as I wanted to be able to take it off the boat and up country.  Something like the mountain gun fielded by the Arabs and my Force Publique force would be just the job.  It would mean buying a gun with  a redundant crew however.

Meanwhile, I also needed a second gun for my Arab force.  The first one I bought from Foundry was missing the gun barrel and although they replaced the pack very quickly this left me with a crew but no cannon.  I didn't want to have to buy another pack just for the gun barrel.

I thought that both these problems had been solved in one go by looking through the catalogue of a firm I hadn't really looked at before, Askari Miniatures.  They have a pack of two French mountain guns which would give one to the British and one to the Arabs.  However they also have a nice pack of four mules designed to carry one of the guns.  I couldn't resist this so have ordered the guns and the mules although this now leaves the Arabs without their second gun.  Maybe I can make a gun barrel!  I probably need another mule now but may have one somewhere.

I don't know how long the models will take to arrive from the US but at the rate I'm painting they will probably be here before I finish the crew, although I did get started on them today.
Posted by legatus hedlius at 17:21 3 comments: