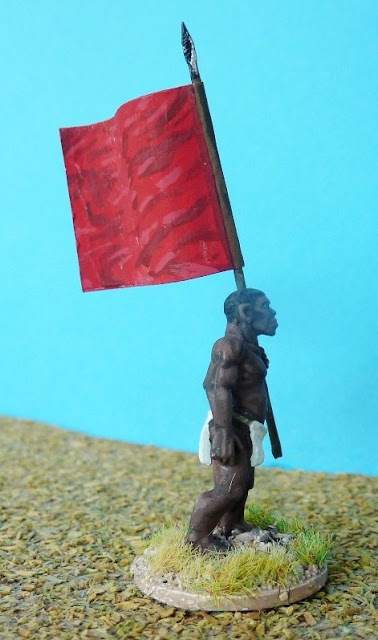 Today I finished my second unit of Wangwana for the Arab forces.  I now have one more unit of fourteen of these to paint.  I'm not sure if I actually have the figures available for this.  I found some today but need to have a look in some of my other file boxes.  Frankly, my unpainted figures are in a total mess at present so I need to have a sort out and a bit of an inventory.  I also need to paint a unit of 12 heavily armed askaris and am not sure if I have these either.

One thing I do have is the 14 Baluchi swordsmen that are needed for one of the other Arab units.  Gary Chalk's scenario is set in 1882 and mine probably ten years later than that.  Baluchi swordsmen like this would probably have disappeared from Africa decades before this but perhaps our Arab warlord has held on to his in his isolated inland enclave.  One thing is for sure they are not going to be as quick to paint as the Wangwana!  I plan to paint them in brighter colours than the Wangwana to reflect their higher status and the saffron coloured clothes that many of them wore.
Posted by legatus hedlius at 17:47 2 comments: