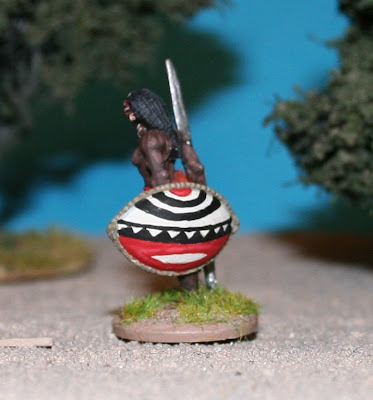 I have finished my first Foundry Masai warrior and he came out very well; largely because the black, red and white shields are so striking. Painting the shield was really very easy and that had been the bit I was putting off. I have undercoated some more now and will start them tonight. 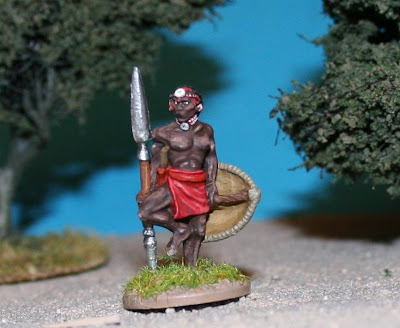 This particular figure would make a good scout for a World War 1 East Africa British army. I hesitated about the loincloth colour but went for a later trade goods red rather than the original animal hide effect. Even though earlier Masai fighting Baluchis and Arabs should probably be wearing the animal hide, the red looks so good that I am going to stick with that I think. It's an easy choice with the next lot anyway as they don't have loincloths! 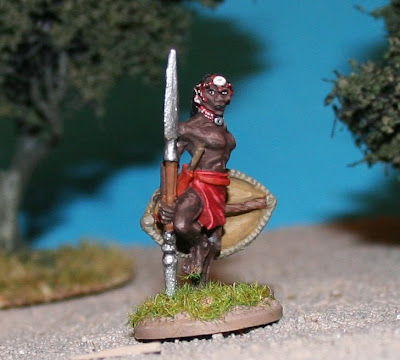 Whilst researching shields I came across this splendid painting by famous fantasy artist Frank Frazetta which I hadn't seen before. It certainly demonstrates the problem with oversized cast spears! I was reading recently in one of the magazines a suggestion that someone should start producing detailed in scale weapons in hard plastic. This would be an excellent idea: the Wargames Factory plastic weapons and shileds are certainly prefarable to the Empress Miniatures metal ones. The Masai's spears are unlikely to be a top choice for someone having a go at this, however! 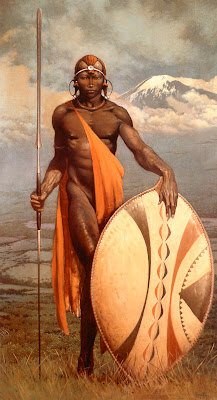