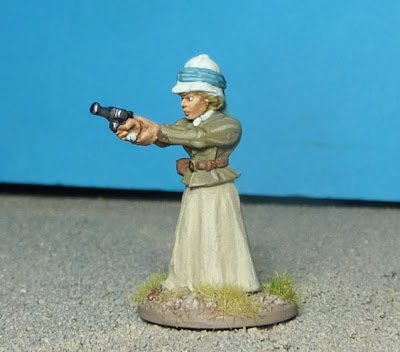 This young lady isn't in the Gary Chalk scenarios but I have had her on the workbench for some time so feel I can put her in somewhere.

I was looking for an annoying lady reporter to join the steamboat transported reinforcements but decided what could be more annoying than a lady reporter who is French?  Hence she has become Amelie rather than Amelia.  Sent by her publication in France (probably something like La Vie Parisienne) in the hope of seeing the British make a mess of things and also follow up rumours of a tribe of warrior women led by a white woman.  She will, of course, be a total liablity!

Incidentally, this figure demonstrates how Mr Copplestone is one of the very few who can sculpt attractive female faces.  Lots of sculptors can do bodies but very few can do pretty faces!
Posted by legatus hedlius at 23:01 3 comments: