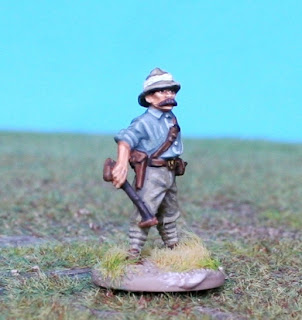 I had already painted two figures for the British officers but decided that one of them looked to old to go gallivanting about up river so he has been promoted to Colonel and will remain at the base further down the Zambezi.  I may put him, Colonel Perceval Hedley, on the paddle boat with the naval reinforcements.

So I needed a new commander for the force, Major Hadden  Bowen.  I've decided that he is a tough, no nonsense man who learnt his trade in Afghanistan and would be likely, unlike his stuffy Lieutenant, William Baker-House, to dress down in the field. 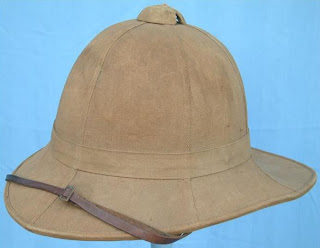 He also wears one of the wider brimmed Wolseley helmets; named after Sir Garnet Wolsely who sported one in the Sudan War of the 1880s. Also called the Solar Topi, this helmet was not yet official issue for officers (it would be by the Boer War) but was very popular with British officers serving in this part of Africa in the 1890s. They would probably have bought theirs at Cearn & Company, Government Road, Nairobi. 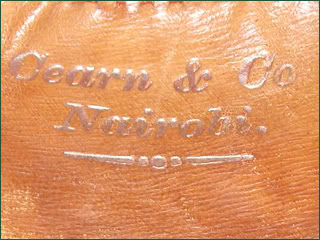 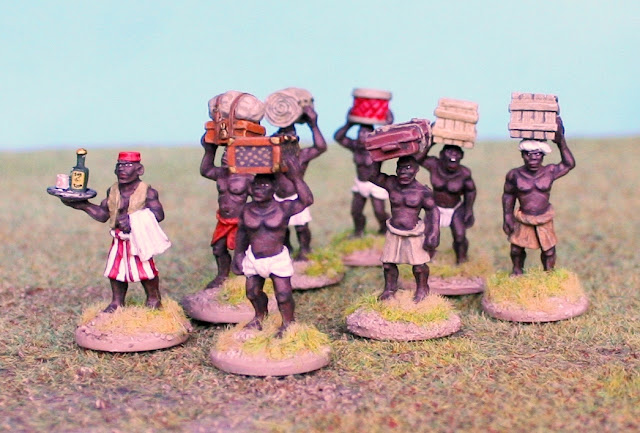 Here is the final unit for the British forces for my Zambezi campaign: the British baggage element.  Technically you only need 4 elements but I feel that only four bearers look a bit thin so I have made each element two figures to give a better looking group. 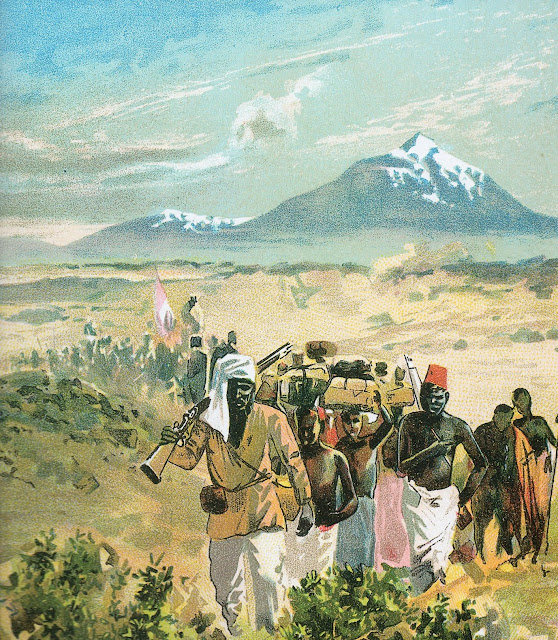 Burton and Speke's original expedition to the Mountains of the Moon, for example, started with around 100 askaris and 100 bearers and that was, essentially a two man expedition.  Probably there should be a bearer for every combatant!  Some of Stanley's expeditions had over a thousand bearers. 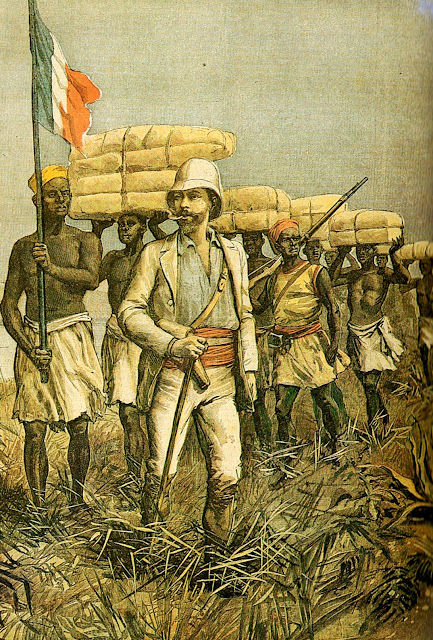 Foundry make two packs of bearers so I have managed to avoid any duplication and still have some left over for the Arab force.
Posted by legatus hedlius at 15:57 1 comment:

What with being in Asia for most of March it rather hit my painting schedule but I did just finish my final fighting unit for the British force for my Zambezi campaign.

These are levy askaris of which you need a unit of fourteen.  I painted thirteen and added a Sikh NCO.  This unit uses the Foundry "almost uniformed askaris" and "askaris in European hats and coats" packs.  On the basis that it is the eighteen nineties I have put them in rather more clothes than these levy units often wore; often just being dressed in a loincloth or long kilt with a musket.  Their commander won't be doing with his native johnnies going into the bush looking like a complete shower, however, so they have picked up discarded bits of unifom from the regulars and added old coats and hats where they can find them.

Now the only figures I need to complete the British force are the eight bearers which are now well under way.  Once these are done I will photograph the entire force before moving on to the Arabs.
Posted by legatus hedlius at 17:13 3 comments: