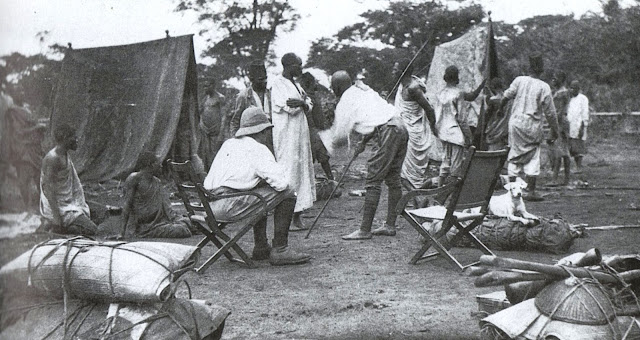 "I say, you chaps, any sign of breakfast yet?"


Well, for me anyway.  I was due to go to Eric the Shed's for my first game of Congo, as organised by Alastair last night but our car started to smoke alarmingly on the way to the garage to have something else fixed.  They needed to keep it in overnight so there was no chance to get to Eric's.  Nearly as annoying was the fact that we had just come back from the Isle of Wight so didn't have any food in the house.   I had to have beans and no toast for dinner which is the sort of food the Old Bat eats.  Alastair rightly said that I needed a relief column to deliver Full English Breakfasts! 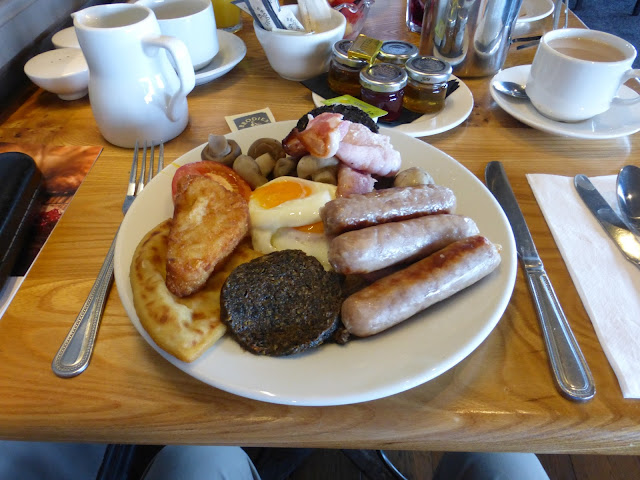 Part of the problem may have been the amount of driving we did last week.  On Monday it was down to Hampshire for mother in law's birthday party.  120 miles there and back. Tuesday we had to drive to Edinburgh to put Charlotte's stuff in the car so as to avoid a ludicrous £500 moving fee. Then on Wednesday we drove back home again. 876 miles there and back.  On Friday we went down to Southampton for the Cowes Powerboat race and back on Sunday.  140 miles there and back.  On the way back the car started to smell (it was burning anti-freeze) and the Old Bat needed help from the garage on Monday when her car started to smoke inside on the A3.  All done now, just a hose had gone. 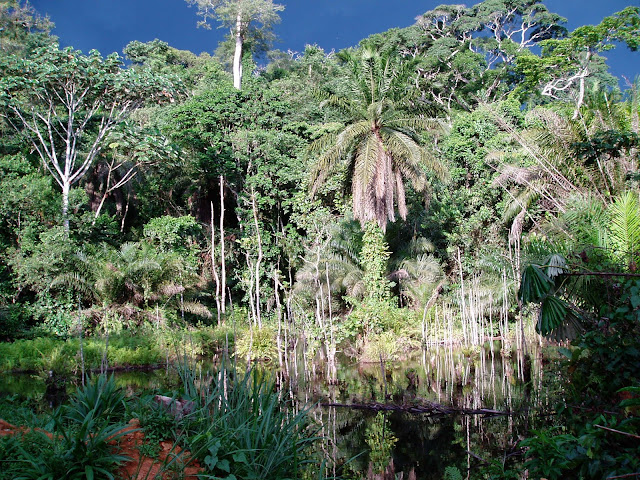 
Although the others had enough figures for the game, poor Alastair had to make lots of extra counters as I couldn't take mine.  Still, the good news was that they all seemed to enjoy it and so, hopefully they will organise another game at some point.  Eric's account of the game is here.  Alastair's is here. I am interested enough that I might try a solo game at some point to see if I can work out the rules.  Guy is off to university in ten days so I can use his room to set up a board. 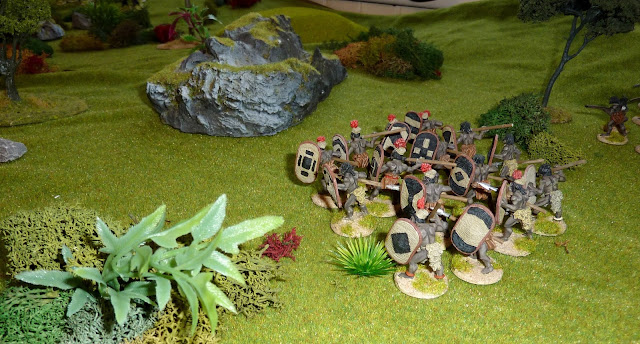 I have enough scenery for a game and certainly enough figures although I gather some animals are needed.  I certainly have, giraffes, gorillas, elephants, rhinos and lions but none are painted!  Above we have a shot of my last Darkest Africa game, ten years ago (!), as my Azande advance. 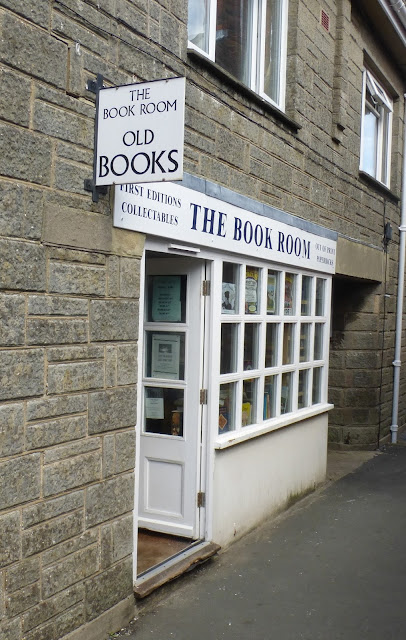 One thing I always try to do on my trips to the Isle of Wight is get to one of two very good second hand bookshops on the island.  They are both owned by the same people and this time I got to the smaller one in Yarmouth.  I never fail to get a good book or two there and this time I got this excellent one called Safari by Bartle Bull. 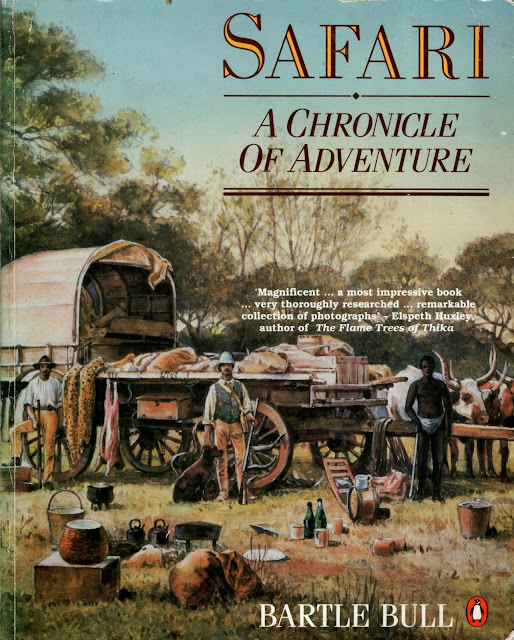 It is out of print now and is not very politically correct in these conservation minded days but it has some superb illustrations, such as the one at the top of this post which are useful for Darkest Africa gamers.  Although it is a Penguin book it is one of  their large format ones, not a normal novel sized one and its 384 pages is packed with black and white and colour illustrations.  I don't know if there are any African safari rules (which sounds like a dubious premise for a wargame but at least simulating shooting animals is better than simulating shooting people) but at least your group of safari hunters can get caught up with all sorts of trouble involving others.
Posted by legatus hedlius at 23:18 3 comments:

Um Bongo, Um Bongo! Where do they drink it? 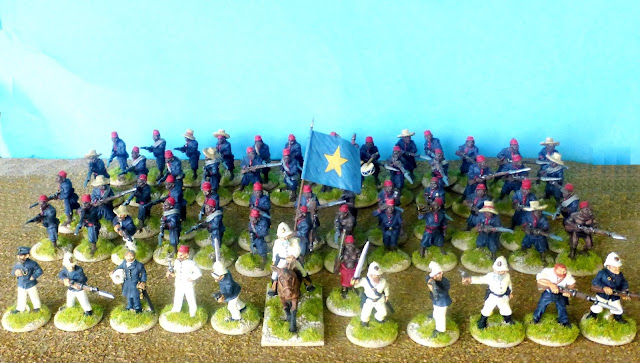 
In the Congo, of course and having spent two and a half weeks in Southern Africa last month (back to Africa next month) I am very excited to look at the new Congo rules from Studio Tomahawk, whose Muskets and Tomahawk rules I have played and enjoyed. 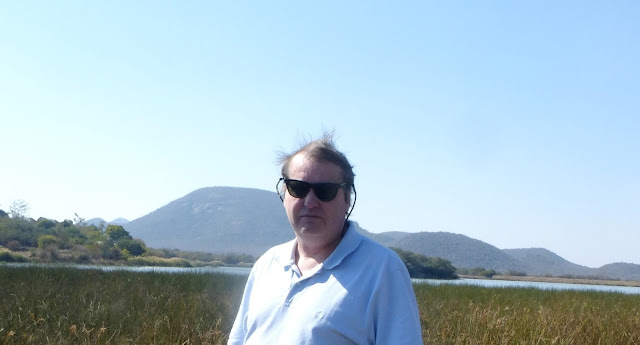 Alastair has already got his and posted a helpful introduction to the rules.  Now, I am always panicked by cards and counters (apart from the fact that I don't like the look of them) but am hoping they will be easy enough for me to follow. 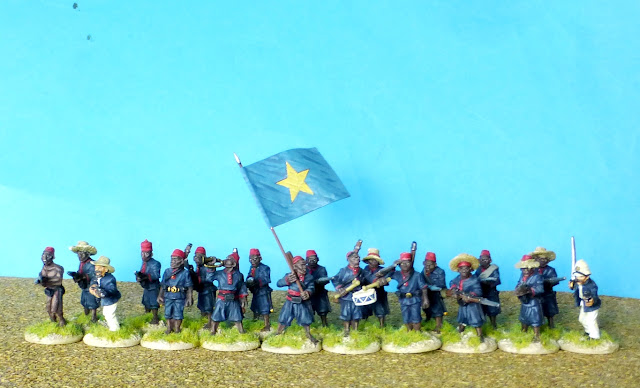 The very first metal 28mm figures I bought were Wargames Foundry's Darkest Africa ones which were first released, rather depressingly, eighteen years ago.  I have most of them (except the pygmies - I hate pygmies) and, even more amazingly I have painted hundreds of them.  As an example, here are my Belgians who have already seen action in a couple of games against my son (they lost). 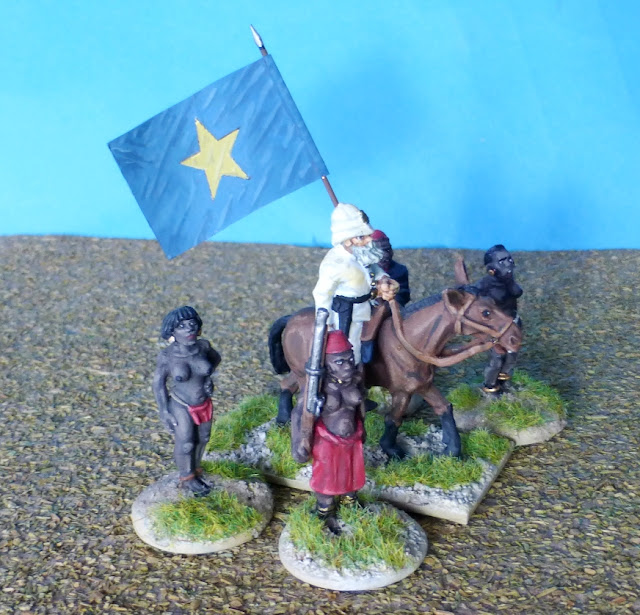 Now, actually it sounds like the rules are more to do with the pre-colonial period, so rather than having troops like this I will need explorers but I have plenty of these too, although some might need repainting as I did them eighteen years ago. 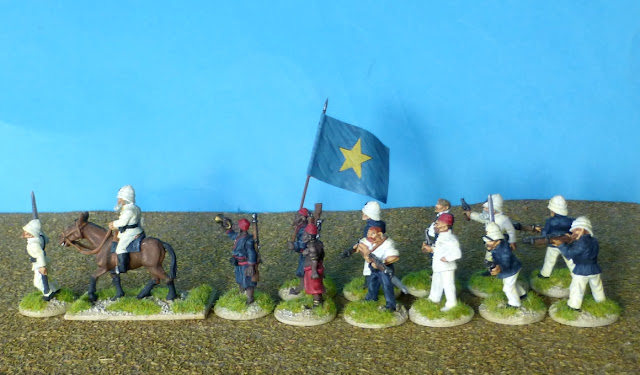 I have now ordered the (really rather expensive) rules from North Star so once I have them I will be able to work out which of my existing figures I can use for the required forces.  It does sound like they are more Hollywood than historical, which is probably a good thing.
Posted by legatus hedlius at 16:58 9 comments: