Death in the Dark Continent by Chris Peers 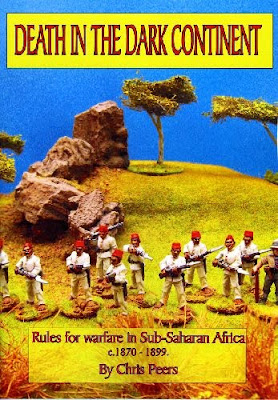 I just picked up the new Chris Peers African rules. I have had his In the Heart of Africa rules for some time and even, shock, played two or three games with them! However, as he says in his introduction to the new set they were, firstly: designed to go with the Mark Copplestone Foundry figures and so included a restricted set of armies and secondly, were really a large scale skirmish set.
The rules cover the period 1870-1899 and end at the latter date quite deliberately as he believes that the Second Boer War was a different sort of campaign. What it does mean is that these rules will work for the Zulu War and the Sudan as well as other colonial conflicts. Some new lists are included over and above those in the original rules: such as Mahdists and much better coverage of Colonial armies in different theatres.
My only slight concern was the need to have multiple based troops but given he suggests a 60x30mm base for 3 troops and mine are based on 20x20mm then making small trays will deal with this quite easily (if time consumingly!) It will be interesting to try them out and compare them with The Sword in the Flame which also uses larger units, rather than being a skirmish game; although in the latter figures are individually based which can make moving large numbers very time consuming.
The rules are available from North Star (although I bought mine in Orc's Nest in London, which is only about 400 yards from my office in trendy North Soho!). North Star also have some extra lists available for free download.
http://www.northstarfigures.com/prod.php?prod=194
Time to paint some more Ruga Ruga, I think!
Posted by legatus hedlius at 13:27 No comments: