I just sat down last week to paint a few Foundry Baluchis when, blow me, Giles put some lovely ones up on his blog.  This was rather like the lunch I went to a couple of summers ago where my wife was very proud of her expensive new dress only to find that someone else there had an almost identical one...and that person was Liz Hurley! Or, maybe, its just that great minds think alike..! 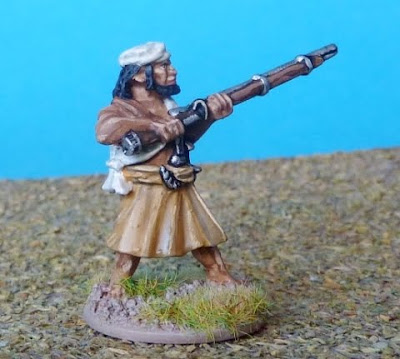 My figures are from the Foundry "Baluchis in Arabian dress" packs. What makes them distinctly Arabian is that they are all carrying the distinctive "J" shaped Khanjar dagger; meaning that they originate from Oman. 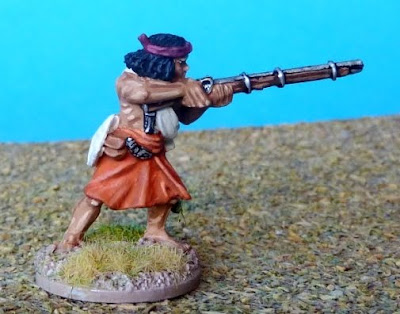 The Baluch (technically, Baluchi is the name of their language) are a people whose origin is rather mysterious. They may have been descended from Syrian Arabs or, more likely, be Persian in origin; coming from the Caspian. Wherever they originally came from, they settled in that part of central Asia where modern day Iran, Afghanistan and Pakistan meet. In the seventeenth, eighteenth and nineteenth centuries many Baluch crossed the Persian Gulf and settled in Oman, Bahrain and an insignificant little fishing village called Dubai. 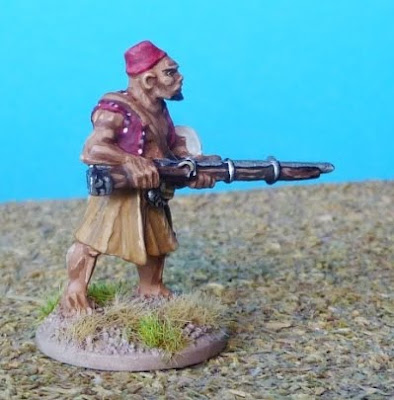 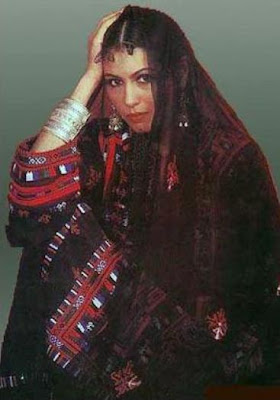 The first Baluchs in Africa were mercenaries hired by Saif bin Sultan, the imam of Oman, who was leading a campaign down the East African coast. Driving the Portuguse out of their stronghold of Fort Jesus in Mombasa in 1698 the Omanis, with their Baluch soldiers, soon cleared them from Zanzibar and from the coastal regions of what is now Mozambique as well. Zanzibar was a prime conquest housing, as it did, the main east African slave market. In fact it became so important under Omani rule that the ruler of Oman, Sa'id ibn Sultan, moved there from Muscat in 1837, made it his main residence and commenced a major building programme. By this time many of the Baluchi soldiers and their descendents, who had been followed by other Baluchs from their homeland, had spread across East Africa from their original garrisons at Mombasa, Dar-es-Salaam, Zanzibar and Pemba. They kept their distinctive identity, however, but by the 1850s, the period which these figures represent, "Baluchis" could have been born in Oman, Africa, Iran or Pakistan; hence the variety of dress in the Foundry packs. 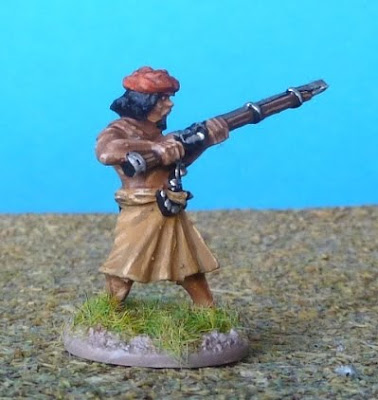 The Omani Baluchs tended to favour plain, saffron dyed robes. Apart from the Khanjar dagger they were armed with silver damascened, long-barrelled (because of their weak gunpowder) matchlock muskets, and long straight swords (non-Arabian Baluchs favoured a curved sabre). 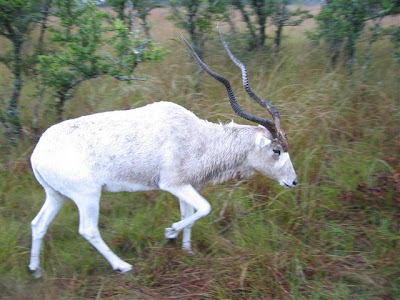 The Arab Baluchs also carried a small 30cm diameter buckler which was often white, either through bleaching, or because it was made from the hide of the addax antelope. One of these figures is depicted with the four boss Persian type of buckler more often seen on Baluchs from the eastern side of the Persian Gulf.


By the early 1880s the Baluchs, as official troops of the Sultan of Zanzibar, had been dismissed and replaced with troops dressed in a more conventional Egyptian style, so these figures are for the pre-Colonial period. Natural opponents would be Masai, Tuta, Ngoni and some of the Congo tribes including the Azande. 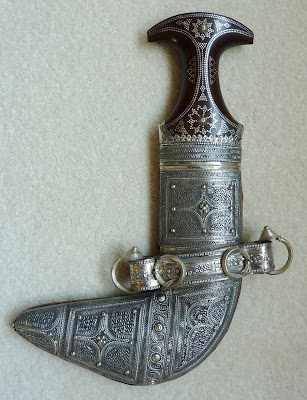 My Khanjar dagger; probably the best present I have been given on an overseas trip (apart from the Chinese girl the Foreign relations ministry "presented" me with in Beijing)

The distinctive Khanjar dagger (actually that is tautologous; "khanjar" is simply Arabic for "dagger") is still seen regularly in Oman and every adult Omani male has one; usually kept in a red, velvet box. I have been to Oman several times and was lucky enough to be presented with one by an Omani minister. The silver filigree is distinctive and the hilts are usually sandalwood or, on expensive examples, ivory or rhino horn. 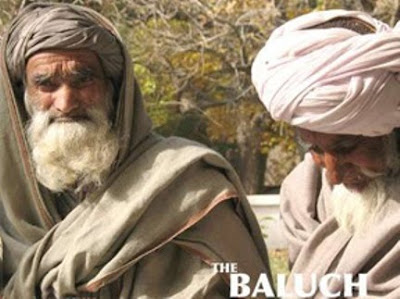 These figures were, as ever with Mark Copplestone sculpted ones, a delight to paint. Like Giles I had to think about skin tone but Baluchs are quite pale so I mixed a sort of sun-tanned Caucasian colour. African-born Baluchs were, by this time, quite often the product of mixed marriages and so a wider range of skin tones can be used for them. 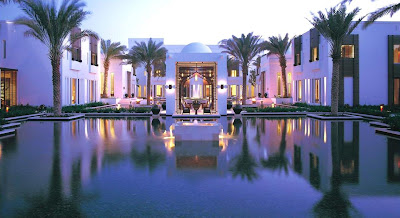 Oman is a lovely place, with attractive towns (deliberately lacking in high rise buildings), friendly people and attractive, surprisingly green, mountain valleys filled with pomegranate trees. I thoroughly recommend The Chedi Hotel in Muscat, if you are ever there. I don't usually like modern minimalist hotels but this is very well done, with villas scattered around cleverly sited pools of water, a nice beach and wonderful restaurants.
Posted by legatus hedlius at 15:06

Now this is a proper post on the Baluchis!! Much useful info here that I wish I'd known about. That aside, I think LH that these figures are some of your best painting yet - there's a real "impressionist" quality to them (I mean that in the most positive sense) and the faces are superb.

Wonderful stuff re Oman! My interest specifically being Muscat/Oman since editing pix of my father's from 58/60 of no relevance to you but your history fascinating to me..and hoping to get back for a visit...not been there since that time.

Its a pleasure to read such informative description of Baloch. Its really very amusing narrative and an informative history of Omani Baloch. I wish some day I could visit Zanzibar and Oman.I greatly appreciate and like your paintings.

Thank you for your kind comments. I, too, would love to visit Zanzibar!