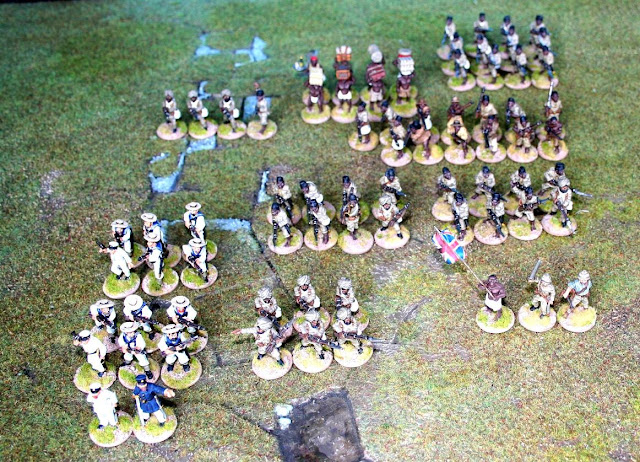 I have also painted two more characters, for the McKenzie's trading post scenario.  This requires a trader, McKenzie, and three clerks. My trader is called Jones, after the character in the underrated and quite brilliant animated children's TV series Charlie Chalk.  Here he is (right) with one of his clerks Portuguese Paulo (left).  I need to find another clerk for him, who will probably be a native and for the fourth character I think I will give him a wife.  Hopefully I will get these two done in the next week. 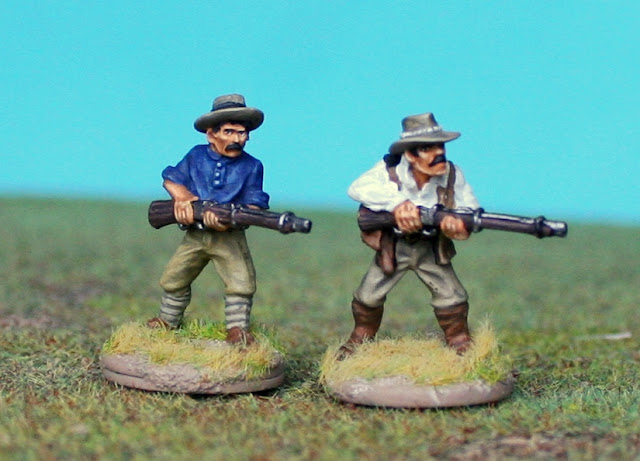 Trader Jones is sick of his bossy wife and wishes he hadn't persuaded her to go up the Zambezi with him as he quite likes the look of the native girls who would be very happy to look after him in exchange for beads, cloth and whisky.  He wishes he had followed the example of his brother, Vic, who had the sense to travel to the South Seas instead to set up his trading post.

In fact the British force is not quite complete as I have to finish my gunboat, which means finding a suitable artillery piece and naval crew for it.  Mutineer Miniatures have just released a naval gun crew which, although from forty years earlier, will probably do.  Their figures will certainly look better with the Copplestone and Foundry ones than the rather lumpy Zulu War naval crew from Foundry.

I have now also started work on my first Arab unit and hope to have these finished by the end of this weekend.
Posted by legatus hedlius at 22:15

Great stuff! Looking forward to see them in action soon.

A most impressive force indeed!

I too am looking forward to your Campaign since I'm prepping one of my own:

Interesting force. Looks very similer to the force that deployed to fight the slave war near Karonga on Lake Nyasa. I believe the Naval party had a 9pounder artillery piece and a Nordenfeldt machine gun. I have a great description of the actions in my British Central Africa book. In fact the actions went on for some years in the Karonga area until those slavers were defeated. Mlozi Kopa Koppa and Musalem. The early actions in Karonga are also very interesting.