The pack of eight Foundry Sikhs

Here is the pack of Foundry Sikhs which I finished today.  I was delayed in finishing them as I found out that I had painted their turbans and belts the wrong colour so had to correct that this week. 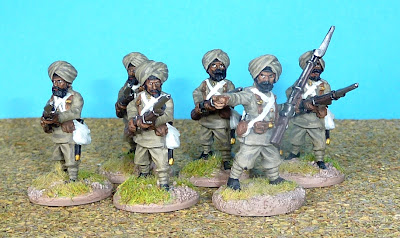 The force of six Sikhs needed for the scenario


In Nyasaland in 1891 Sikhs were recruited from the Indian Army along with Muslim cavalrymen and Zanzibaris under Sikh NCOs.  In 1893 another 200 Sikhs were recruited and were very active in the anti-slaver wars until 1895.  By 1898 when the Ngoni rebellion was being dealt with the only Sikhs remaining were the NCOs commanding African troops.  Still, there is a good solid historical background which makes their appearance in these scenarios quite justified. 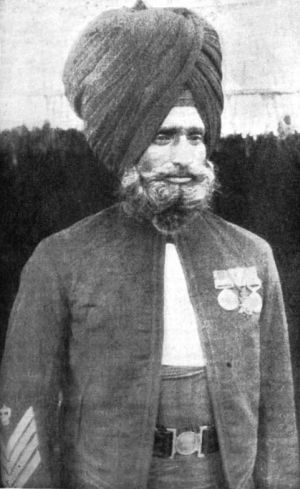 I must say I thought that Mark Copplestone had severely exaggerated the appearance of the Sikhs' turbans (more than the usual 28mm exaggeration, anyway) until I found a photograph of a Sikh NCO from Nyasaland.  These were big turbans! Sikh of the Indian Contingent in Nyasaland (c. 1893)

Their original uniform was very colourful, after the Zouave fashion, with a black turban, black jacket with yellow cuffs and piping, yellow trousers and white shirt and gaiters.  The uniform was designed by Johnson, the first commissioner for the British Central African Protectorate, and the three predominant colours of black, yellow and white were supposed to represent the three races involved in the force ( African, Asian and European).  By the time of our scenario the Sikhs were wearing standard khaki. 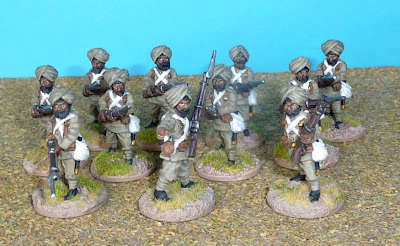 These were pretty good to paint although, unusually for Copplestone, there were a few vague bits of metal, particularly around the water bottle and some of the straps.

I now only have two more elements to paint for the British: the 14 irregular askaris, which I have now based and undercoated and the four  baggage elements which will comprise eight porters (as I think four look a bit silly).

I haven't painted any figures other than for this project this year and in two months have done 52 figures, which is my best yearly start for three years.
Posted by legatus hedlius at 15:26

Excellent. I love that colour picture of the Sikhs in their splendid black and yellow uniform. I hadn't seen that before.

It was a very easy and fun conversion to do, using a Foundry head and an American Civil War Zoauve body.

Brilliant conversion! I'd love a whole unit of those!


I just noticed I spelled Zouave wrong earlier. Now I feel like a right berk.

Just what I had been thinking! I think the Sudan turbans are a bit small though!

Yes, you are right. But I balk at the thought of the cost of buying a bunch of Foundry DA Sikhs just for their heads. :)

Hello,
I see and it is very beautiful !
I search Sikhs for WW1 and for these Sikhs , you said they are from Wargames Foundry. Unfortunately, i don, t find them. Where are they?
Can you help me?
Thanks
nebbiu@hotmail.fr